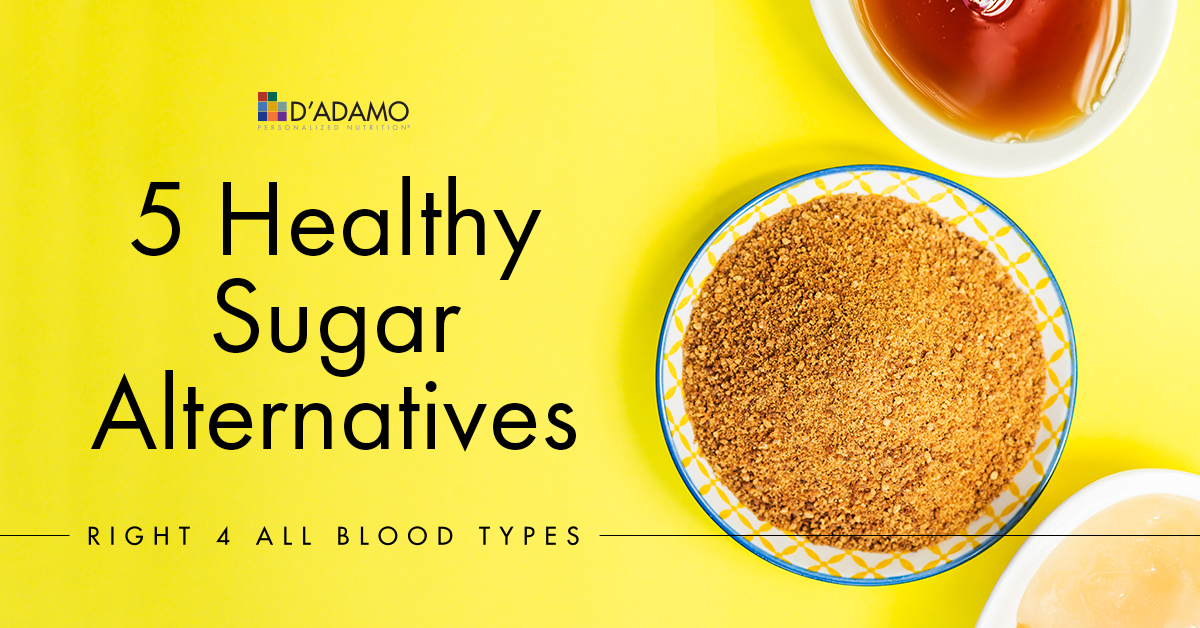 Refined sugar is considered as addictive as a drug and potentially as detrimental to your health. Yet, according to the U.S. Department of Agriculture, the average American consumes anywhere between 150 to 170 pounds of refined sugars in one year! It is clear that collectively we have a serious habit to kick. Sure, there are plenty of sugar-free sweetener alternatives on the market but those chemically created artificial sweeteners are even more toxic than refined sugar. Ending your sugar addiction doesn’t mean that you have to stop enjoying a hint of sweetness – it just requires that you find healthier alternatives. Below are five all-natural, blood-type friendly options.

Agave Syrup
This honey-like sweetener is made from the sap found in the core of the agave plant. It’s sweeter than table sugar, so you can use less to get the same results, while at the same time boosting your recommended daily allowance of vitamins and minerals: It has trace amounts of calcium, iron, potassium and magnesium. Agave nectar also has a lower glycemic index than table sugar, so it won’t cause a spike in blood sugar levels. (Neutral for all blood types and secretor types)

Raw Organic Local Honey
There is so much to buzz about! Honey contains trace amounts of niacin, riboflavin, thiamin, vitamin B6, free-radical fighting antioxidants and, some studies show, may help to alleviate seasonal allergies. If you’re trying to lose weight, there’s good news for you; honey’s low glycemic index helps keep sugar levels in check – and it’s 50% sweeter than refined sugar, so you’ll be satisfied with less. (Neutral for blood types A secretor & non-secretor, B secretor & non-secretor, O secretor and AB secretor, avoid for O non-secretor and AB non-secretor)

Molasses
During the refining of sugar cane and sugar beets, the juice squeezed from these plants is boiled to a syrupy mixture from which sugar crystals are extracted. The remaining brownish-black liquid is molasses. Molasses is a popular sweetener in baking and can also be used as a syrup on pancakes and waffles. Its health benefits include a high iron content, as well as vitamin B6, magnesium, calcium, and more antioxidants than any other natural sweetener. (Beneficial for A secretor and neutral for all other blood types and secretor types)

Stevia
Stevia is the powdered extract of the plant, Stevia Rebaudiana, an herb indigenous to Paraguay and Brazil. While this zero-calorie sugar substitute tastes just like table sugar, it won’t cause a spike in blood sugar levels. When using stevia, consumers should note that it is 200-400 times sweeter than sugar and use far less when baking or stirring into coffee or tea. Health benefits include phytochemical compounds that help control blood sugar, cholesterol, and blood pressure. (Neutral for A secretor & non-secretor, B non-secretor, AB secretor & non-secretor, and O secretor; avoid for B secretors and O non-secretors)